My Friend Al Kresta: Story of an Unsung Hero and Modern-day Prophet

PrevPreviousMusic Video Showing Daughter Surviving Abortion Gets 100,000 Views in 5 Days!
NextJohn Glenn's Wife: I Teared Up Reading it to My WifeNext

This article is a great read and inspires one to hope for the faith and country. Al Kresta and I have been good friends since 1983 when I first met him upon my return from living in Switzerland.

Al was dressed in knickers and a goutee at the time, playing the part of my then hero Dr. Francis Schaeffer. Al was acting the part in a theatrical production and I was quite impressed. I approached him afterwards and said, “I was just moved back from Switzerland where I was studying with the man you just portrayed so well. Who are you?” 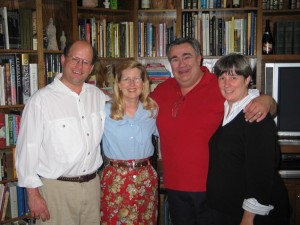 From that point on we have been great friends. We were men with kindred spirits and a similar love for truth and an honest search for God. Al played a huge role in my conversion to the Catholic Church and we continue to be good friends now. There are few people I respect as much as Al Kresta.

This article by John Burger in Catholic World Report is entitled Al Kresta: Catholic Missionary Looking Inward, then Outward. It is an easy read and a wonderful introduction to Al Kresta and the many facets of his amazing life. It was my pleasure to share a few thoughts with John Burger for the interview. I hope you enjoy it.

Here is an excerpt: At 62, Kresta has spent a lifetime searching for that Christ, coming to know him better and finding ways to make him better known. He regards himself primarily as a missionary, whether he is on air, producing Catholic programming, organizing conferences, writing books, or simply being a husband, father, parishioner and neighbor.

“Al Kresta is a broadcaster, journalist and author who is, first of all, a missionary,” says his bio page at Ave Maria Radio, where he serves as president and CEO.

“The point of the show and of Ave Maria Radio is to make more and better Catholics,” said Nick Thomm, executive producer and news director of “Kresta in the Afternoon.”

It was not always thus with Albert Kresta. His early life and detours through drugs, the New Age movement and other distractions are documented in Surprised by Truth: 11 Converts Give the Biblical and Historical Reasons for Becoming Catholic (ed. Patrick Madrid, 1994, Basilica Press).

“Back then, kids would take a flight at anything, just to experience it,” said Kresta’s mother, Alice, in an interview.

Kresta grew up in a Catholic family in the New Haven, Conn., area and showed early promise, excelling at a Catholic high school. His mother recalled how some of the foster children she took in at the time would climb on Al’s back—and how he took a special liking to them.

But he was 14 at the time, and the cultural winds of the 1960s soon changed him. He played in a rock band and was arrested twice for possession of illegal drugs, which he also was using, and he ended up with a two-year suspended sentence.

He stopped going to church and wound his way through strange religions, pursuing gurus in various parts of the country.

Al is not just a convert, a radio personality, author and media personality, he is truly a prophet for the 21st century. In a blurb for his book I suggested that people ignore his message to their own detriment.